Each week, we highlight the latest news related to the humanitarian and health crises in our countries of operation: Bangladesh/ Myanmar, Colombia/ Venezuela, Gaza/ Palestinan Territories, India, Lebanon, Pakistan, Sudan, Syria, and Yemen. For more frequent updates, make sure to follow us on Facebook, Instagram, and Twitter.

Bangladesh has extended its border closure with India an additional two weeks after detecting its first case of the Indian variant of COVID-19. At least six cases of the highly transmissible variant have been reported as Bangladesh continues a loose lockdown until May 16. Overall infections in Bangladesh are declining following a peak in April with only 1,285 cases and 45 deaths reported on May 8. In total, Bangladesh has recorded 772,127 cases of COVID-19 and 11,878 deaths since the pandemic began. (Reuters)

Colombia expects a surge in COVID-19 cases following two-weeks of massive protests across the country. Intensive Care Units in Colombia’s largest cities are approaching full capacity and officials have warned that the health system is at risk of collapsing. At least 26 people have died and 800 people have been injured during the anti-government protests, which are expected to continue for the foreseeable future. (Al Jazeera)

The escalation of violence between Israel and Gaza is putting immense pressure on Gaza’s weak health system and may cause a new wave of COVID-19 infections. According to Gaza’s Ministry of Health, at least 580 Palestinians have been injured and 103 have died. Several health facilities in Gaza have stopped COVID-19 testing and vaccinations as they deal with the influx of wounded people. FIghting has also led to the closure of Gaza’s borders, which prevents the delivery of medical supplies, COVID-19 vaccines, and fuel for generators. Gaza officials have warned that hospitals across Gaza may lose access to electricity in the next few days. (The Washington Post)

India is experiencing the worst COVID-19 outbreak of any country since the pandemic began with over 400,000 daily cases. Health experts have warned that the recorded number of infections is likely a severe undercount since two-thirds of the population live in areas with limited testing. Officials have reported 254,000 deaths from COVID-19, but some estimates suggest that the true number is more than 750,000 and predict that total deaths will double by August. A new variant of COVID-19 has also emerged in India and has already spread to 44 other countries. As of May 12, only 2.8% of India’s population has been vaccinated. (TIME)

Karadeniz, a Turkish firm which provides nearly one third of Lebanon’s electricity, has threatened to halt supplies unless debts are paid. The company claims it has not been paid since the beginning of Lebanon’s financial crisis 18 months ago. Even before the crisis, Lebanon struggled to generate enough power to meet domestic demands and daily power cuts have increased in recent months. The loss of Turkish power supplies will reduce Lebanon’s overall capacity to less than one third of its energy demand. (Al Jazeera)

On Saturday, Pakistan received its first batch of COVID-19 vaccines through the COVAX program. The shipment of 1.2 million doses will boost Pakistan’s vaccination campaign which has already inoculated 3.3 million people. Pakistan is currently imposing nationwide restrictions, including a ban on public transportation, to manage a spike in cases expected from Eid al-Fitr celebrations. Despite having a population of 220 million, only 40,000 COVID-19 tests are conducted per day and health workers lack the testing kits needed to detect the Indian variant of the virus. (Reuters)

Sudan’s government has suspended the activities of Anhar Organization for Peace, a Sudanese humanitarian NGO, over alleged ties to the previous regime. The suspension has resulted in the closure of 16 health centers in camps for displaced persons. Anhar provided health, nutrition, water, and sanitation services to more than 169,000 people across North Darfur. No alternative services were put in place prior to the suspension and community leaders in Kabkabiya, Saraf Omra, and El Fasher have warned of deteriorating health conditions. (Radio Dabanga)

Widespread vaccine hesitancy in northwest Syria is hindering the COVID-19 vaccination campaign. In April, the northwest received 54,000 doses of the AstraZeneca vaccine through the COVAX program. Many people living in the region have expressed concerns over vaccine side effects, such as blood clots, and question the severity of the health crisis. Even among frontline workers, only 6,070 out of 40,000 health and humanitarian workers have been vaccinated. Two more shipments of COVID-19 vaccines are expected to arrive in northwest Syria by the end of the year with enough doses for 850,000 people out of the region’s 3.5 million residents. (Reuters)

According to UNHCR, more than 40,000 Yemenis have been affected by heavy rains and flooding across the country. The majority of people impacted are internally displaced persons who were already living in precarious shelter conditions. Over 4 million Yemenis are currently displaced, 80% of whom have been displaced for more than one year, and ongoing clashes continue to exacerbate the humanitarian crisis. Around 20.7 million people are in need of aid and the current response plan is only 27% funded. (ReliefWeb) 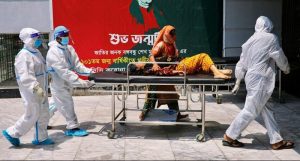 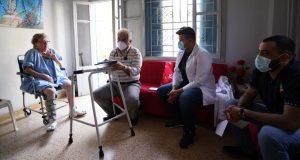 As Lebanon continues to grapple with devastating economic and health crises, elderly residents of Beirut face dire challenges. The lack of strong 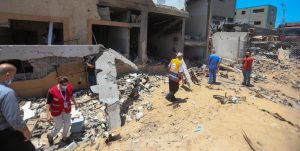 Gaza: Update from the Ground

May 24, 2021 After 11 days of violent hostilities, including airstrikes in Gaza that killed 248 Palestinians including 66 children, a ceasefire