Each week, we highlight the latest news related to the humanitarian and health crises in our countries of operation: Bangladesh/ Myanmar, Colombia/ Venezuela, Gaza/ Palestinan Territories, Greece, Lebanon, Pakistan, Sudan, Syria, and Yemen. For more frequent updates, make sure to follow us on Facebook, Instagram, and Twitter.

Bangladesh is refusing to accept the return of 81 Rohingya refugees who left Cox’s Bazar on a ship that became stranded in the Andaman Sea. The refugees, currently in the care of the Indian coast guard, were found suffering from extreme dehydration after running out of food and water. The bodies of eight refugees were also recovered from the ship. India has not agreed to accept the refugees and their fate is uncertain. (Reuters)

Colombia has received 117,000 doses of Pfizer’s COVID-19 vaccine, becoming the first country in the Americas to receive vaccines through the COVAX program. Colombia began its vaccination campaign in February and plans to inoculate 35 million people by the end of the year. Colombia has experienced one of the worst outbreaks in the region, having reported more than 2.25 million cases and 60,000 COVID-19 related deaths. (Aljazeera)

Only 10,000 people in Gaza have registered with the Ministry of Health to receive COVID-19 vaccinations. Gaza began its vaccination campaign in February after receiving 22,000 doses of the Sputnik vaccine. The first phase of the campaign is focused on inoculating the 16,000 health workers and 150,000 people with chronic diseases that live in Gaza. Many residents are afraid that vaccines may be counterfeit or have terrible side effects and are unwilling to accept vaccines. Gaza expects to receive an additional 11,200 doses of vaccine from the West Bank in the next few days. (Al-Monitor)

The Greek government has ended its Filoxenia housing program which provided shelter to nearly 7,000 asylum seekers. Evictions began in February, forcing families into the streets in Thessaloniki, Athens and Corinth. Many asylum seekers lack the necessary documents to travel or seek help through other programs. (InfoMigrants)

The Lebanese government is facing intense criticism over its handling of its COVID-19 vaccination program. The regional director for the World Bank has threatened to suspend funding to Lebanon after more than two dozen people, including politicians and staff, were vaccinated ahead of health workers and other priority groups. The scandal has undercut public confidence in the government and vaccination campaigns. Migrants and refugees are also allegedly being prevented from registering for vaccinations, despite being included in the official plan. (Middle East Eye)

Around 150,000 health workers in Pakistan have received their first dose of COVID-19 vaccine. Members of the medical community who have received a vaccine have been asked to share their experiences with colleagues who have concerns about being vaccinated. The government is also considering making vaccinations mandatory for all frontline workers. (Gulf News)

Sudan has received 800,000 doses of AstraZeneca’s COVID-19 vaccine, becoming the first country in the Middle East and North Africa region to receive vaccines through the COVAX program. The first phase of vaccination will focus on health workers and people over the age of 45 with chronic health conditions. The World Health Organization has worked with national health authorities to develop a comprehensive vaccination plan that includes training for health workers and ensuring vaccine safety. (UNICEF)

On Saturday, a fire broke out in Al-Hol camp that killed one woman and three children. At least 20 people are currently hospitalized with injuries, including six people in critical condition. Al-Hol camp is the largest IDP camp in Syria, containing more than 62,000 people, many with alleged ties to ISIS fighters. According to UNICEF, there are more than 22,000 foreign children being held in prisons and camps across Syria in need of repatriation. (UN News)

According to a recent report by the International Rescue Committee, only 64% of hospitals and 52% of primary health centers in Syria are functioning. Across Syria, 70% of health workers have fled the country since the beginning of the decade-long conflict. In the northwest, 59% of people report having been directly impacted by attacks on health facilities. An estimated 12 million Syrians are in need of health assistance, one third of whom require routine reproductive, maternal, neonatal and child health services. (International Rescue Committee)

The UN has received less than half of the funding needed to avert famine in Yemen. Only $1.7 billion out of the requested $3.85 billion pledged so far, less than what was donated in 2020. UN Secretary-General Antonio Guterres has warned that “cutting aid is a death sentence” for Yemenis. (Reuters) 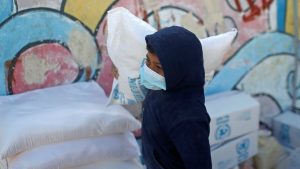 Since late February, there has been a sharp increase in COVID-19 cases in Yemen. As of April 4, there have been 4,701