Each week, we highlight the latest news related to the humanitarian and health crises in our countries of operation: Bangladesh/ Myanmar, Colombia/ Venezuela, Gaza/ Palestinian Territories, Lebanon, Pakistan, Sudan, Syria, and Yemen. For more frequent updates, make sure to follow us on Facebook, Instagram, and Twitter.

Bangladesh has approved the Sputnik V vaccine for emergency use after losing access to vaccines from India. The government had previously signed agreements for 30 million doses of AstraZeneca’s vaccine with India, but received only seven million doses before India halted exports due to a surge of new cases. Bangladesh expects to receive four million doses of the Russian vaccine by May and is in the process of approving China’s Sinopharm vaccine as well. (Reuters)

The COVID-19 pandemic is disproportionately impacting vulnerable communities in Colombia and Venezuela. In Colombia, intensive care units have filled to capacity and Venezuela’s crippled health system was already requiring patients to provide their own medical supplies before the outbreak of COVID-19. While both countries have begun vaccination campaigns, the rapid spread of the Brazilian strain of the virus threatens to undo progress. (ABC Local 10)

Gaza’s Ministry of Health has reported that at least five doctors have died from COVID-19 since the pandemic began. Many health workers have contracted COVID-19 and the rate of infection remains high as Gaza grapples with a second wave of infections. The elderly and people with underlying conditions represent the majority of those who have died. (Middle East Monitor)

Gaza’s hospitals are struggling to manage the surge in COVID-19 cases caused by a more transmissible strain of the virus and large crowds during Ramadan. Infection rates hover between 1,000 and 1,500 new cases per day. Gaza’s main health facility treating COVID-19 patients reports that its oxygen supplies are nearly exhausted. Gaza is also facing a shortage of vaccines, having received enough doses for only 55,000 people, and vaccine skepticism is high among the general public. (Associated Press)

An estimated 1,000 health workers have left Lebanon since the Beirut port explosion last August. In the midst of Lebanon’s financial crisis, imports of medications and medical equipment dwindled and the salaries of some medical workers lost 90% of their value. Many health workers, including senior members of the medical community, have left to pursue work in wealthier countries in the Gulf, Europe, and North America. (The World)

On Tuesday, Pakistan reported 201 deaths due to COVID-19, the highest number of deaths in a single day since the pandemic began. According to government figures, at least 17,530 people have died and there are more than 88,000 active cases. In response, the government has deployed the military to 16 major cities to enforce COVID-19 restrictions and social distancing guidelines. The Ministry of Health is working to expand hospital capacity as the vaccine rollout continues to lag behind other countries in the region. (Al Jazeera)

Sudan is experiencing its third wave of COVID-19 infections with rising numbers of new cases in Khartoum, El Gezira, and Kassala. Health authorities are calling on members of high-risk categories, including medical workers, the elderly, and people with underlying conditions, to get vaccinated as soon as possible. In March, Sudan received 828,000 doses of AstraZeneca’s vaccine and plans to begin administering second doses on May 9. The government has reported  33,104 cases and 2,349 deaths since the pandemic began. (Radio Dabanga)

Syria is experiencing a rapidly growing third wave of COVID-19 infections amid nationwide shortages of medical equipment, testing kits, and oxygen. Health officials in the northeast have reported more than 5,300 cases in April as 47% of tests return positive results. The only COVID-19 laboratory in the northeast is expected to run out of testing kits within the week. Intensive care units in Damascus are at full capacity and, according to the International Rescue Committee, 83% of patients who receive invasive ventilation are dying. (The Guardian)

More than four million people are displaced in Yemen, many of whom have experienced multiple displacements and remain at risk of violence. In Marib governorate, an area with a 2014 population of 20,000, an estimated one million displaced persons live in crowded camps near the frontlines of fighting. Camps have repeatedly been hit by shelling, which has killed dozens and displaced more than 13,700 people since the beginning of 2021. Many families have nowhere else to go and are waiting until the violence escalates further before attempting to move again. (Middle East Eye) 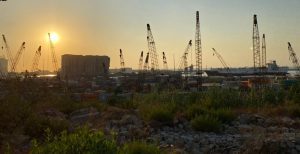 One Year After the Beirut Blast: Q&A with MedGlobal’s Lebanon Team

On August 4, 2020, a devastating explosion occurred in the port of Lebanon’s capital city, Beirut. The explosion left over 200 people 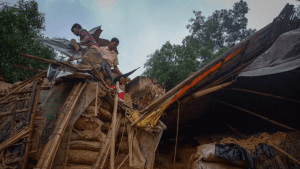