As COVID-19 cases continue to rise across Syria, patients are dying of a lack of oxygen. MedGlobal is providing oxygen concentrators and CPAP/BIPAP machines, or non-invasive ventilators, to help COVID patients breathe and survive their illness. There is a severe shortage of oxygen for patients in Syria. So far, MedGlobal distributed 200 oxygen concentrators and 100 CPAP/ BIPAP machines in partnership with local independent NGOs throughout Syria, including to Aleppo, Damascus, Homs, Latakia, Hama, Zabadani, Bludan, and Safita.

Each oxygen concentrator or CPAP/BIPAP machine costs about $560. The provision of oxygen and non-invasive ventilators are critical for people with difficulty breathing, primarily those suffering from severe COVID-19 symptoms.

Your donation will help save lives throughout Syria.

Northwest Syria is home to over 4 million people, over half of whom are IDPs and many who have been displaced several times. In the Idlib governorate, there are now between 300 and 500 new confirmed COVID-19 cases each day. With a health system destroyed from war, local health workers warn that a health catastrophe may be imminent. MedGlobal, alongside our partners Rahma Worldwide and Violet Organization, has begun the installation of 2 major oxygen generators: one in Idlib City and one in Darkoush. These generators will help supply health facilities, especially those leading in COVID-19 treatment, with critically-needed oxygen. Health facilities in northwest Syria have been facing an increasing demand for oxygen cylinders with the rapidly increasing number of COVID-19 patients who face severe symptoms, including difficulty breathing. This oxygen supply will have a lasting impact for local communities. 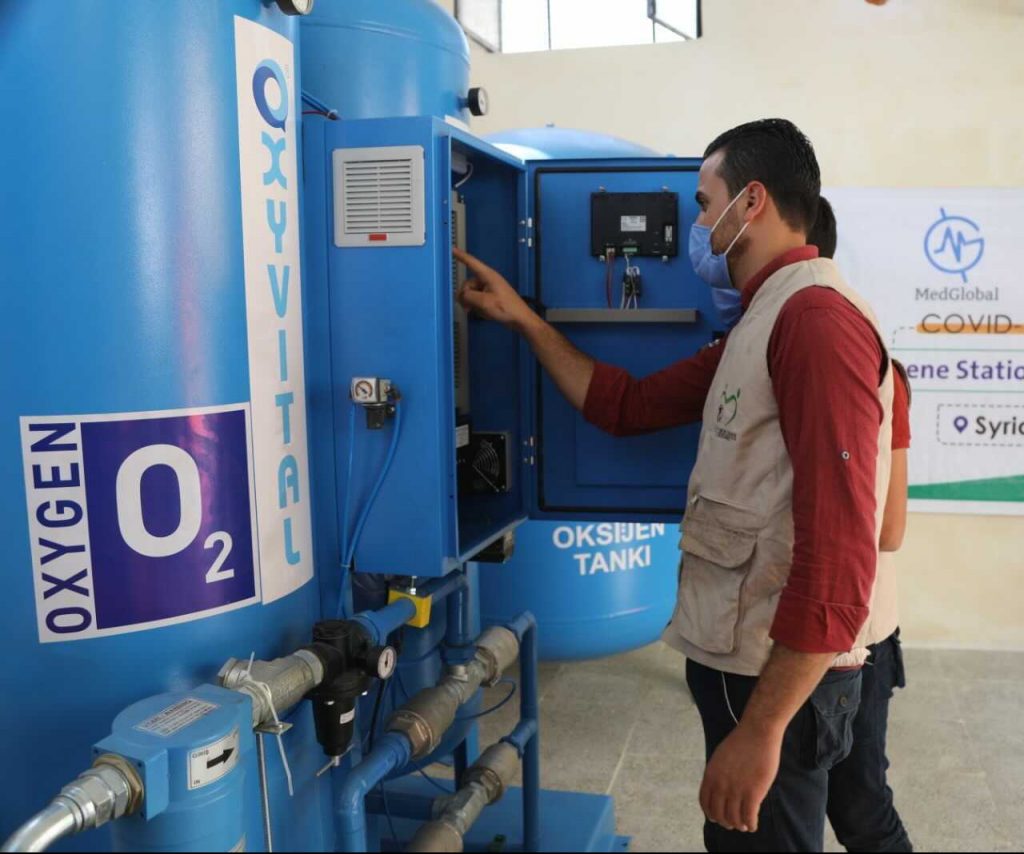 In Syria, there are over 6.2 million internally displaced persons and 13.1 million people in need of humanitarian assistance.  MedGlobal has supported over 100,000 beneficiaries with medical equipment and supplies, including emergency, surgical, and primary care. We led an emergency response in besieged Eastern Ghouta through the provision of an ambulance and medical supplies. MedGlobal further supported over 1,000 surgeries performed on trauma and burn patients affected by the ongoing war and provided treatment for children with malnutrition, emergency injuries, and chronic diseases.

In 2020, MedGlobal increased its assistance to Syria in scope and scale. In the early winter months, we assisted with winterization efforts including the distribution of blankets and shelters. When attacks on civilians areas led to a mass displacement crisis in northwest Syria, MedGlobal supported evacuation efforts in Idlib and rural Aleppo for over 1,200 internally displaced people. When COVID-19 hit Syria, MedGlobal began a widespread response, which has included building oxygen generators, supplying critical ventilators and oxygen concentrators, and providing health and sanitation supplies like personal hygiene kits to health workers and vulnerable families.

“I saw some villages completely emptied or half-emptied of their residents,” said Dr. Zaher Sahloul, the president of MedGlobal, an organization that sends medical teams to disaster regions, who risked the bombardments and threats from extremist groups to visit some of the most devastated areas this week.

“Sharing the information with the United Nations did not lead to greater protection,” said Dr Zaher Sahloul, the president of MedGlobal who was recently in Idlib. “If anything people are thinking right now that by sharing this information it’s increasing the risk of targeting the hospitals.”

“Women want to control the time that they deliver because things are unexpected,” Sahloul said. “A bombing can happen at any time, and in the middle of the night you cannot move to the hospital.”

The continued fighting and crisis in Idlib left people with nowhere to go except the Euphrates shield area and Olive Branch to the northeast that is controlled by Turkey. Turkey has sealed its border and is not allowing refugees in.

Turkey already has 3.5 million Syrian refugees and there is an expected 1-2 million more Syrians who will be displaced at the Syrian-Turkish border.

Preparations are underway in Turkey to accommodate 580,000 IDPs in Efrin/Euphrates shield area, though nothing is finalized. The cost of displacement of 800,000 people is projected to be about 350 million dollars, with 200 million already allocated from the UN.

Needed emergency food baskets cost $2 each and larger food baskets that can last 1 week for a single-family cost $10. The most urgent need is for shelter and a single family’s shelter ranges from $900 to 1000 for one month ($600 for the tent, $170 NFI, $140 for food and other expenses).

There is a huge mobilization of Turkish civil society and the public to donate and send in-kind donations.

Dr. Sahloul reports from Idlib, where the humanitarian situation is catastrophic.

MedGlobal’s President, Dr. Zaher Sahloul, just returned from Idlib Provence where humanitarian and medical conditions are catastrophic. He witnessed first-hand the impact of targeting hospitals, the indiscriminate attacks on civilians, and the large displacement of desperate populations.

Watch Dr. Sahloul describe the bombing of the Pulse of Life Hospital in the Hass Village of Idlib and its impact on access to healthcare.

MedGlobal has sent urgent medical support through local partners and is now is seeking your help.

Your donation will help provide medical relief to Syria’s most vulnerable. #GiveWithMedGlobal #EyesOnIdlib

Reaching the Hard-to-Reach: A Look at the Zogra Camp in Syria

By Emma Ackerman, MedGlobal Communications & Advocacy Intern Conflict in Syria has brought 10 years of near constant threats of violence, destruction of health infrastructure, 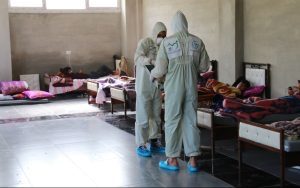 Challenges to COVID-19 Vaccination in Syria

By Andrew Moran, MedGlobal Policy & Advocacy Intern. On March 15, the humanitarian crisis in Syria will enter its eleventh year. A decade of violence 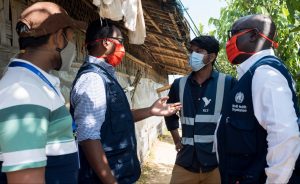 The conflict in Syria is now in its eighth year, creating the largest humanitarian crisis of our time. Millions of people are in need of emergency assistance such as medical and food assistance, water and shelter. Over 500,000 people have been killed and over one million injured as a result of the Syrian War. More than half of all Syrians have been forced to leave their homes, often multiple times, making Syria the largest displacement crisis globally. There has also been an alarming rise in the targeting of hospitals, medical facilities, and even medical personnel, by a vast variety of weaponry including chemical weapons. According to the WHO, 70% of total worldwide attacks on health care facilities, ambulances, services and personnel have occurred within Syria. The Syrian conflict has triggered the world’s largest humanitarian crisis since World War II. Humanitarian needs continue to rise, population displacements are increasing, and an entire generation of children is being exposed to war and violence, increasingly deprived of basic services, education and protection. 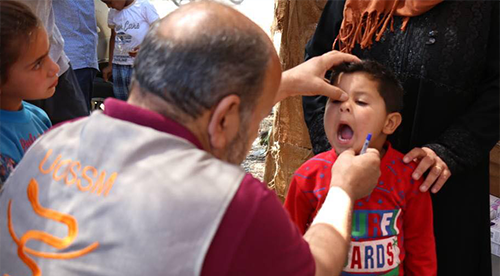 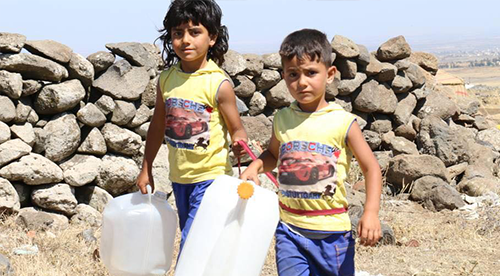 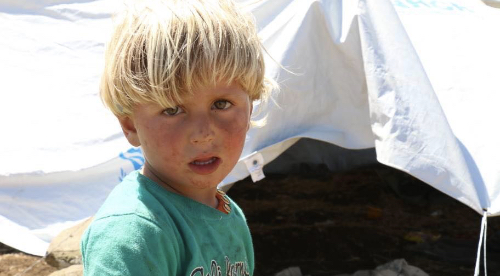